Number of days estimated spent on action in phase 1: 150 Days

Role: C2C CC project management (CDR) take on the role as a facilitator, coordinator and networking body of the CCA activities.

14 out of the 21 municipalities as well as 4 risk management plans mention flood risk from the sea and fjords as a major challenge in their CCA plans (cf. Figure 1). In the region, two cities are appointed to be risk-prone from the sea or fjords with reference to the EU floods Directive, these being Randers and Juelsminde. In Randers the flood risk is related to sea level rise, storm surges and combined events between river and fjord. In Juelsminde the risk is related to sea level rise and storm surges. Besides these two areas, the land facing the western part of the Limfjord is already experiencing flooding from storm surges regularly, especially during autumn and winter storms. 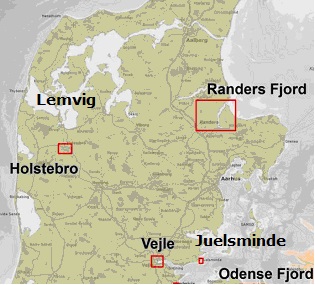 Description (what, how, where and when):

The region has approximately 1000 km of coastline and is experiencing increasing challenges related to storm surges. The largest event occurred in relation to the December storm in 2013 (in Denmark the storm was named Bodil), with the highest registered water level in Lemvig with 195 cm above normal and just 10 cm from flooding a recently established floodwall in Lemvig (cf. Figure 9). The increasing power of the storms due to higher sea temperatures are already experienced in Denmark and among the region’s coastal areas. Sea level rise will only increase the risk of flooding of coastal habitats and livelihoods.

The objective of this action is: To increase the coastal resilience taking into consideration the environmental state and marine biodiversity and to enhance urban resilience.

C1.1 The CCA challenges of the coastlines

What:
Many of the cities in the eastern part of the region are facing the sea of Kattegat, the landscape is formed by the ice age and is characterized with fjords and/or small river deltas. These cities experience similar challenges in handling coastal flooding. Municipalities are not always using the same climate scenarios in their risk maps, and thus may plan for preventive actions differently, e.g. two neighboring municipalities may both plan to establish dikes along the coast, however, not following the same climate risk scenario.

There is a need to create an overview of the used climate risk scenarios and planned actions, and to establish fora for the municipalities to coordinate both design measures for preventive action and timing of implementation. The coordination of east coast plans and actions has specific attention in the IP (cf. actions C8 and C11).

At Thyboron Canal and Western part of the Limfjord the challenges are unique due to the location of an emergency harbor in Thyboron for ships in distress with a need for access to The North Sea, through Thyboron Canal. The canal is impacted by erosion and sedimentation from the increased number and size of storms, and the maintenance of the canal impacts the water ecology of Western Limfjord. This west coast area has specific attention in the IP (cf. actions C9 and C17).

The challenges are different at the West Coast, the Danish Coastal Authority has for years had the responsibility for coastal protections in this area, spending millions of Euros on sand feeding along the coast, and establishing and maintaining dikes and sluices to protect towns and land. This area thus has less attention in the IP.

C1.2 Interaction between rivers and coastline

What:
The catchment areas of the fjords at the east coast of the region cause challenges with flooding in the coastal towns located at the mouths of rivers and in the bottom of the fjords. The challenges arise especially in coupled events combining heavy rains and storm surges. Solutions may be found in a combination of measures. Dikes and sluices may trap water from the catchment and cause flooding behind the coastal protections. Solutions to retain surface water upstream such as large wetlands may prevent floodings from heavy rains. A combination of solutions may have multiple purposes Actions C9, C10, C11, C12 and C13 may benefit from this action.

Where:
CDR – location not decided, meeting rooms of CDR or the Municipalities, alternatively conference facilities organized through procurement agreements of CDR.

Within CDR, major areas are affected during storm surges, which due to climate change are increasing in intensity and frequency. Tabel 5 and figures 10-13 shows the affected areas of a 100 year stormsurge event in 2050. There is a risk that each municipality define and construct solutions for coastal protections without regards to neighboring municipalities and/or sustainability and long term effects. Capacities within this field are in most municipalities lacking as it is a relatively new challenge, whereas the municipalities have the potential to gain from each others experiences and work together on gathering external expertise. 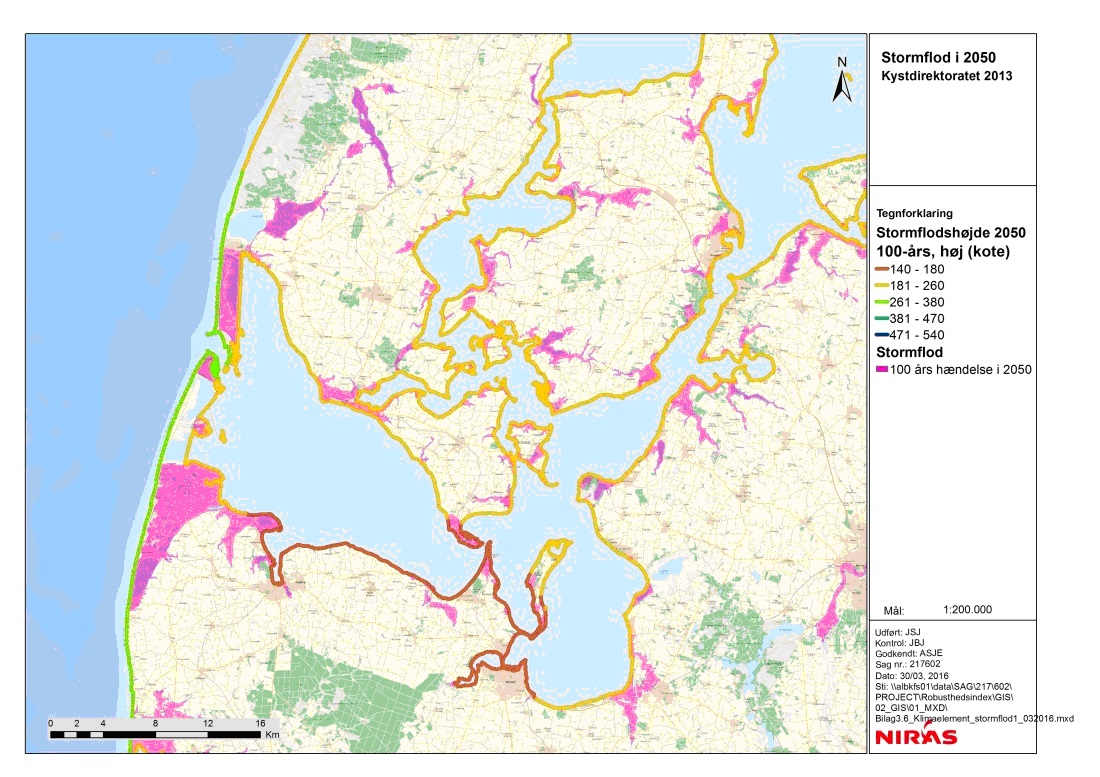 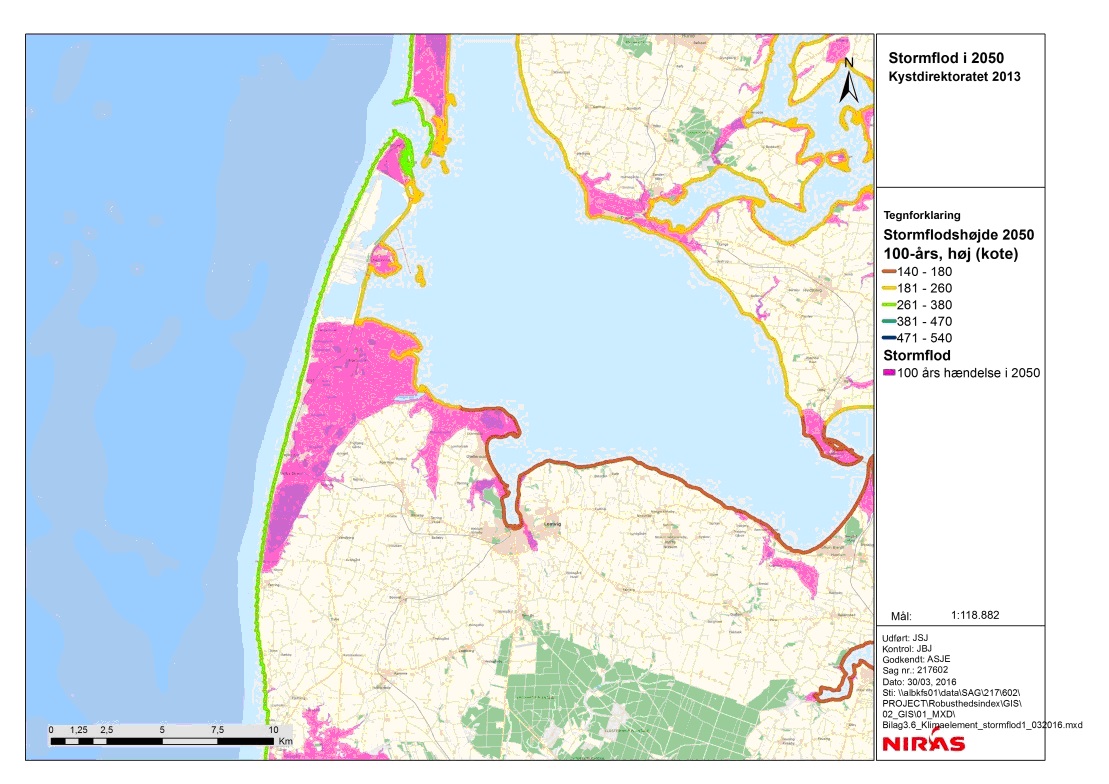 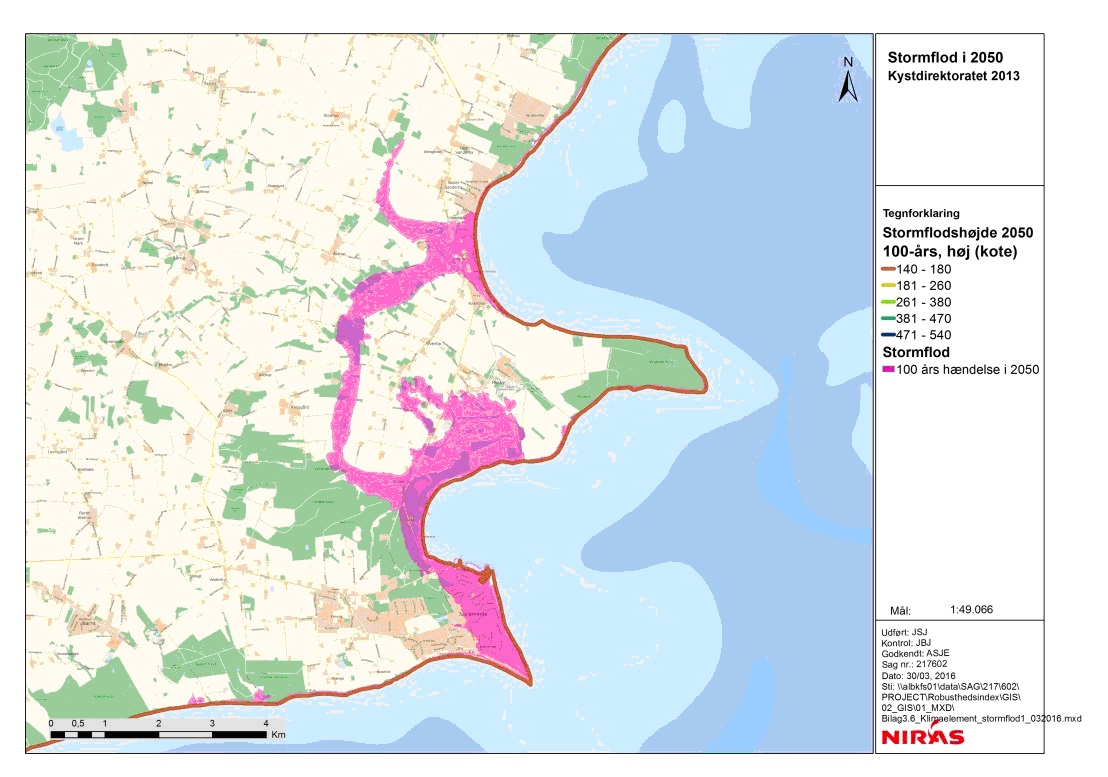 One constraint is that the actions (C8, C9, C10, C11, C14, C17, C18) will not follow the same time schedule, whereas some activities of C1 may not be of same relevance for all actions. This is accommodated by action C1.1.2 and following knowledge sharing meetings and workshops to secure sufficient capacity building.

Phase 1:
The results of C1 provides insight in the needs of the partners in regard to knowledge, analyses and tools on coastal issues. Capacity building of at least 25 professionals on national and international best practice on coastal protection. One study trip with at least 25 professional to the Netherlands and Germany to increase the inspiration on best practice. Development of common tenders and adjustment of Phase 2.

Phase 2:
Awareness rising and capacity building of at least 25 professionals on holistic approaches and synergies between sustainability and coastal protection measures. Show casing and development of novel and innovative stakeholder organization- and governance models involving app. 25 professionals. Adjustment of Phase 3.

Phase 3:
Identify solutions together with at least 25 professionals for coastal protection from inside and outside the partnership. Suggestions for how to raise the level of coastal protection in CCA plans. Insight in other regions working with sea and fjords relevant for replications of C8, C9, C10, C11, C14, C17, C18.

Phase 1:
Capacity building of at least 25 professionals on combined scenarious on Rainfall and storm surges.

Phase 2 and 3:
Information and etablishment of a capacity building network for and among the partners on CCA and coastal challenges (to be continued after the end of the IP) 25 professionals involved.

Workshops and meetings includes budgets for lunch coffee and conference venue 75 € per participant.

Workshops includes preparations in advance and hours spend during workshop and after the event for output material.
Workshop transport is calculated via an average of 100 km and 0,487 € kr. per km.

Phase 3:
Minutes of meetings accessible on www.c2ccc.eu
Evaluation of the meetings (digital form)
One note on replication of the findings in the project

Note on the continuation of a CCA and coastal challenges network after the IP incl. recommendations on purpose, organisation and financing.

C1 in the matrix 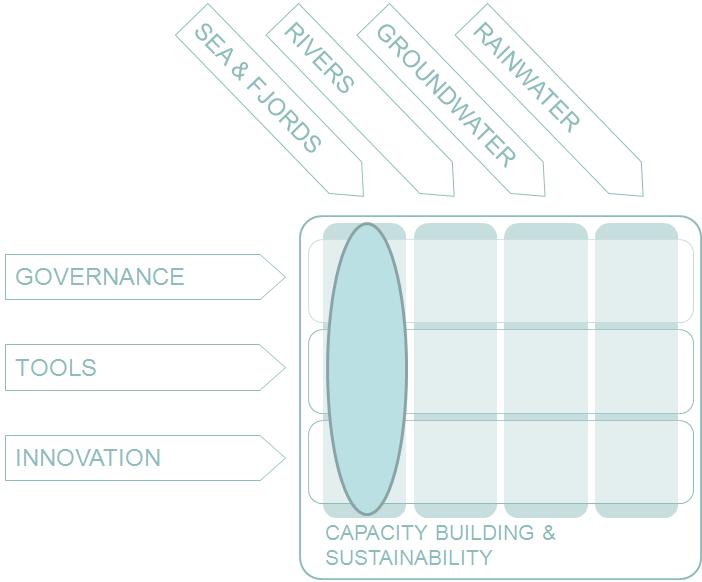