The town of Horsens is threatened by floods, because a major part of the town centre is lower than 1.5 meter above the normal sea level in the Horsens Fjord. With rising sea levels and amounts of water from watercourses in the hinterland due to increasing precipitation and more powerful downpours, there is an urgent need for securing the lowest lying parts of the town against flooding.

This action analyses and lays out scenarios containing all relevant issues regarding flooding from the fjord, the watercourses and handling of the sewer systems. It also deals with the development of the port area, which is being converted into a residential, recreational and commercial area.

This action is primarily linked to governance and tools within most areas of the hydrological cycle apart from groundwater.

In the municipality’s CCA plan, Horsens town centre is designated as focus area 12, cf. Figure 1 (page 34 in the CCA plan). The figure shows that the focus area is the most critical, assessed on the basis of the parameters risk of flooding and highest value, and it is therefore very important to make it flood-proof. Action C14 Flood-proofing Horsens Town Centre will gain from actions under C1 relating to desk analysis and identification of knowledge gaps and reviews of in the risk maps and planned actions.

Experience will be exchanged between demonstration projects C8, C10, C11 and C18 dealing with the coastal cities of Randers, Grenaa and Juelsminde.

A common understanding between stakeholders of sustainable solutions (economically, environmentally, socially and long term) with a focus on land use, cost-effective measures, planning, implementation, maintenance and operation will be shared and developed across actions C8, C9, C11, C10, C17, C18 and facilitated by CDR.

Under action C2 knowledge on CCA and rivers developed under different actions will be shared.

Modelling, interpretations, analysis and data sampling are similar in the different catchments and C14 may benefit from this knowledge sharing in relation to the Bygholm cathment area (figure 25).

Scientific aspects currently the highly debated within EU, e.g. on the synergies and trade-offs between CCA and water ecology, the need for warning systems related to flooding of rivers and local contingency planning, and the synergies between farming and wetland restoration will also be shared and discussed for the benefit of action C14.

Under Action C4 Rainwater, C14 will gain from the identification and experience of different setup models and testing of SUDS within CDR.

Under action C5 specific training courses, workshops and masterclasses, with point of departure in the challenges experienced by the partners will be implemented for the benefit of action C14 and other actions.

C14 will coordinate with Horsens wastewater utility on the integration of an urban hydrological model of the sewer system of Horsens town, which will be completed during 2017.

What:
Horsens town is threatened by floods, because a major part of the town centre is lower than 1.5 meter above the normal sea level in Horsens Fjord. With rising sea levels and now with more water from watercourses in the hinterland due to increasing precipitation and more powerful downpours, there is a great need for securing the lowest lying parts of the town against flooding, cf. Figure 24 and 25. Figure 24: Picture of flooding at the outlet of Bygholm Å and in Bygholm Park in December 2013 The aim of C14 is to secure Horsens town centre against flooding when there is a storm surge and/or extreme flows in the three watercourses Dagnæs bæk, Bygholm and Hansted Å, which all run through the town. It requires overall considerations and scenarios of flooding for the fjord, watercourses and sewer systems, and holistic planning and coordination in relation to the port area Nordhaven, which is being converted into a residential, recreation and commercial area. An initial project was carried out by Horsens Municipality (ends April 2016) forms the basis of C14 with the purpose to carry out a detailed project design for flood proofing of Horsens town. The initial project, hereafter the 2016 project, included a simple watercourse model and involves an outline of proposed solutions to prevent flooding from precipitation, watercourses and sea levels under saturated and stationary conditions, respectively. The possible solutions are outlined for short-term flood proofing at a level off 1.8 meter above normal sea level, and a politically adopted long-term flood proofing at a level of 2.6 meter above normal sea level, se example in Figure 24. The results of the ‘2016 project’ proposes water retention in the catchment area and dike solutions using sluices and pumps in Horsens town. However, political reality are likely to change, and there has been discussions on establishing a small-scale barrier solution on the sea floor in Horsens’ outer fjord, inspired by the Mose Project in Venice. The ‘2016 project’ sets the basis of C14.

Action C15 supplements action C14 by its nuanced approach to the drainage of water, so that the production potential of farming is developed, and the towns do not end up functioning as delay reservoirs, when the watercourse has high flows.  We expect that the two actions can greatly benefit from each other. The aim of C14 is furthermore to provide inspiration to the development of other solutions in other coastal towns that are threatened by rising sea levels and/or water from the hinterland catchment area. Figure 26: Consequence map for flooding with preliminary outlined proposal that will protect Horsens town in the short term?, equivalent to flood-proofing at a level of 1,8 meter DVR90. The floof proofing will be established using a high tid wall earth dykes and mobile water tubes.

How:
C14 will be contain the following activities: preparation of tender material and tender phase for external expert assistance for step 2 to 5; provision of knowledge in the form of status, data collection and model set-up; scenario calculations and initial stakeholder involvement; preparation of proposals and stakeholder involvement; preparation of project design and invitation to tender material for contractors; flooding related to watercourse Store Hansted Å and the northern part of Horsens town.

Where:
The project area covers Bygholm Å catchment area and extends to HEDKOM and Vejle Municipality, cf. Figure 27. Bygholm Å catchment area drains into the watercourses that flow through Horsens town centre and out to Horsens Fjord. The main focus is on Horsens town centre and covers the port, parts of the inner town and Bygholm Park, which will be flooded with a 5-year storm surge event in 2050 (2.4 m DVR90), cf. Figure 28.


Figure 27 All of the Bygholm Å catchment area with flow paths on terrain.
Figure 28 Flooding in Horsens town with a 5-year storm surge event in 2050, equivalent to 2.4 m above normal sea level (Horsens CCA plan p. 34).

C14.1 Preparation of tender material and tender phase for external expert assistance for activity 2 to 5

This activity is based upon the above mentioned pilot project and the purpose is to find the most suitable and cost efficient external expert to aid in the following four activities.
Preparation of tender material.

C14.2 Provision of knowledge in the form of status, data collection and model set-up

The following sub-activities are involved:

C14.5 Preparation of project design and invitation to tender material for contractors

Horsens town centre covers central town functions, including homes, companies, technical installations and a town park. The area consist of major economic assets that are at risk (Horsens CCA plan p. 21, cf. risk map). The project benefits the overall aim of C2C CC in creating a climate resilient town by implementing the local CCA plan’s most prioritised challenge and in collaboration with the affected parties.

C14 will coordinate with Horsens wastewater utility on the integration of an urban hydrological model of the sewer system of Horsens town, which will be completed during 2017.
C14 may be delayed according to the schedule of this model, since it shall be included as an integrated part of C14 model. In relation to the integrated model carried out in C14, it may be necessary to conduct further data collection (see activity 2), which could affect the schedule.
Initial correspondence with the municipalities of Vejle and HEDKOM on C14 has taken place, however, resistance to upstream solutions may occur if win-win solutions are not defined. This issue is counteracted by including technicians and politicians from the two municipalities in the project.
Uncertainty related to financing implementation of solutions: internally in Horsens Municipality, between Horsens Municipality and Horsens Waste Water utility, and between the municipalities of Horsens, Vejle and HEDKOM. Early involvement of the established steering group for CCA and politicians will aim to find a fair solution for financing.

Expected results for Phase 2:
The action will result in basis for decision making on which outlined solution possibilities will be worked further and clarify which additional matters that need to be clarified, whereas it is possible to define long-term solutions for protecting Horsens town centre from flooding that meet the politically adopted level of protection for the municipality (stated in the CCA plan).

The following will be defined: Designated local sites and solutions for retaining water in the catchment area in one or several locations - if needed. Designated most suitable positioning of dike reinforcements that protect Horsens town centre. Calculated filling times for any reservoirs, and calculated dimensioning of pumps and sluices with different scenarios in the current and future climate. A smart pump and sluice control system. Solutions for water flow and for the catchment area that promote biodiversity as much as possible, improve water quality and provide recreational options for local residents. With Nordhavnen under redevelopment, solutions shall be provided for traffic connections to the port area and the central neighbourhood. Dikes, sluices and pumps are designed to be visually inspiring and to provide recreational urban spaces, and integrated into the urban life of Horsens town.

Expected results for Phase 3:
Mapped and estimated flooding risks related to the watercourse Store Hansted Å, and the interaction with Horsens Fjord and the lakes like Nørrestrand. Prepare a decision base to determine wheter climate mitigation are needed and if necessary, decide wich climate adaption action are to be carried out.

Expenses for direct personal costs are based on person days for Horsens personel based on present salaries and pensions, etc. Expenses for external expert help is based on prior experience. External assistance will be used for highly needed expertise in relation to scenario calcultaions.

Subsistence costs are based on prior experience and can be further subdivided into Hotel costs, Daily allowances/Payment for meals and local transportation categories, as shown below for this action’s subsistence costs items: 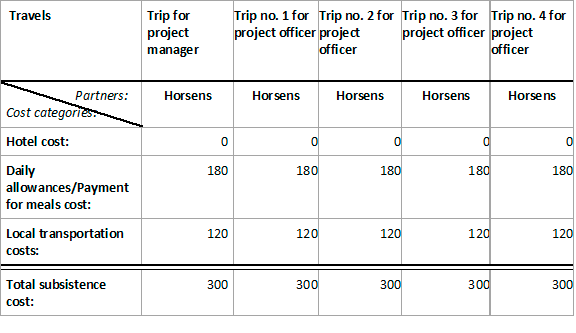 31/12/2019 : Possible solutions identified for retaining water in the catchment area, including both in the open countryside and from the urban areas.
30/06/2020 : Specific solutionsss proposed for water retention, dikes, pumps and if required, barriers in the fjord.

31/12/2020 : Preparation of a conceptual design and disposal project for the needed solutions.

CC14 will focus on flooding issues in other parts of the municipality (Horsens CCA plan pp.25-35) with special attention to floodings related to the watercourse Store Hansted Å, including the northern part of Horsens town, where houses close to the watercourse periodically are flooded.

C14 in the matrix 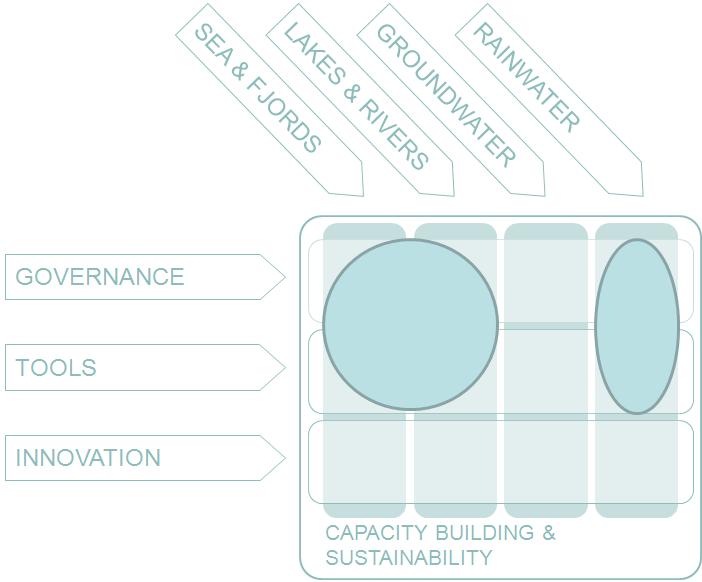