The sea level is rising and the high tides are expected to increase and become more extreme with higher sealevels and episodes that last longer.

High tides in some locations will push the seawater through the soil matrix in the hinterland, which means the groundwater will rise causing a lot of inconvenience for industry and citizens.

The project supports and qualifies the climate actions by gaining renewed knowledge about the interaction between saltwater and groundwater and the associated challenges.

Citizen participation is a pre-requisite for success. This action is primarily linked to governance and tools with sea & fjords and groundwater.

Activity C18 Citizen-driven Climate Change Adaption in Juelsminde will gain from actions under C1 relating to desk analysis and identification of knowledge gaps and reviews of in the risk maps and planned actions.

Experience will be exchanged between demonstration projects C10, C11, C14 and C8 dealing with the coastal cities of Horsens, Randers and Grenaa.

A common understanding between stakeholders of sustainable solutions (economically, environmentally, socially and long term) with a focus on land use, cost-effective measures, planning, implementation, maintenance and operation will be shared and developed across actions C9, C10, C11, C14, C17, C8 and facilitated by CDR.

Under action C3, in selected areas a detailed local model is set up focusing on groundwater, surface and/or seawater.

Models are based on the present data and collections of new data sets e.g geophysical data and C18 will benefit from this model. Under ation C5 specific training courses, workshops and masterclasses, with point of departure in the challenges experienced by the partners will be implemented for the benefiot of Action C18 and other actions.

As of now, there is no complementary action to C18

The sea level is rising. According to the Danish Meteorological Institute (DMI), the sea level is expected to increase by up to 0.7 m by 2100 cf. Figure 39 The total number of high tide incidences are also expected to increase and become more extreme with higher sealevels and episodes that last longer. High tides in some locations will push the seawater through the soil matrix in the hinterland, which means the groundwater will rise causing a lot of inconvenience for industry and citizens.

The frequency and impact of these events will vary, for example depending on the geological conditions and the volume of high tide water (scale) and duration. The occurrence of these events can have a significant impact on the future use of the area in the coastal hinterland, the choice of any coastal protection system and for the run-off of surface water into residential areas and in areas where land is cultivated. In urban and holiday home areas, the problem is topical because of the planning of new homes and the replacement of existing homes.

The problem is described in the literature, e.g. in Groundwater in a future climate, December 2011 (co-financed by the EU Interreg IV B programme), particularly with regard to infiltration of saltwater into the groundwater and into drinking water.

In Hedensted Municipality’s risk assessment plan, three basic challenges for making Juelsminde safe from sea flooding in the future have been identified: at Strandengen, by the harbor, and at the existing dike.

The municipality wants citizens and companies to be involved in finding solutions that the town’s future will be based on, and which will constitute part of the basis for how the town can develop. At the same time, the action plan states that a dike association will be established during the plan period.

C18 supports and qualifies the climate actions by gaining renewed knowledge about the interaction between saltwater and groundwater and the associated challenges. Figure 41: Juelsminde harbour. In the yellow areas, it must be ensured that those areas are protected from the sea penetrating the town, with a medium-large probability already today Figure 42: Juelsminde was protected by a coastal headland 150 years ago. Today, the coastline is close to homes and holiday homes

C18.1 Interaction between saltwater and groundwater

This action seeks to find a correlation between high tides and subsequent rising groundwater in the upper soil layer, approx. 0-2 meters below the existing terrain identified in relation to the distance from the sea/fjord and different geological soil types.

The project will shed light on the problem in the area between Snaptun and Juelsminde (cf. C8). Tools for modelling the local risk will be set up and tested, based on existing models and local measurements. Recommendations for how to utilize the new knowledge will be devised.

It is proposed that the C18.1 is defined and carried out in a collaboration between CDR, the Danish Coastal Authority and other C2C project partners with an interest in the issue, HEDKOM and VIA. C18 involves the following activities:

Phase 1
Activities related to 1 and 3

Phase 2 and beyond
Activities related to 2 and 3

The purpose of C18.2 is to establish a shared local understanding of the challenges from climate changes and the basic efforts in this project. Where results related to the challenges of pressurised water from C18.1 will also be included.

When preparing the risk management plan, representatives of the three sub-areas (Strandengen, at the harbour, and at the existing dike) expressed a strong wish to help to find long-term solutions to the challenges.

The three groups of (secondary) stakeholders represent respectively, home owners at a particular risk of flooding, companies around the harbour and a large group of home owners and holiday home owners, who today mange the primary protection of Juelsminde against floods. Challenges and solutions to climate changes are made between the three groups and the municipality’s Climate Change Adaption employees.

The vision committee and Hedensted Municipality are responsible for the concept ‘Juelsminde Strandpark’ (beach park), a project to utilise the establishment of the new coastal protection as an opportunity to create an epicentre for our town, harbour and beach.

This action aims to create a citizen-driven development, so that the challenges resulting from climate change, including in particular sea level rises and the solutions for this, are included in the development of Juelsminde.

C18.2 will be carried out in collaboration with the C2C CC Advisory Committee, knowledge institutions and companies that have knowledge and experience in mobilising and facilitating citizens and companies on interconnected and holistic development, and at the same time, to create broad public support for the solution of the long-term challenges.

Where: Town of Juelsmine, Strandengen, the harbour, and the existing dike.

At the same time, the organisation should be tested with the establishment of the new dike association, which is an important part of the climate proofing of Juelsminde after 2021.

C18.1 requires that data collection and monitoring can be carried out in the area. To achieve this, contact with local landowners and stakeholders made early on.

To achieve this the C2C CC Advisory Committee partners that have knowledge and experience in mobilising and facilitating citizens and companies will be included.

The data loggers and the ongoing monitoring will result in data and insight in the actual interaction between the sea and the groundwater in Juelsminde and between Juelsminde and Glud Håb. 500-600 hectares of land screened.

The local organising in Juelsminde will result in increased social recilience through establishment of a new dike association and the creation of a shared understanding locally of the challenges and mobilizing local front runners. 5000 citizens involved. The Advisory Committee contributes with best practice knowledge on citizen involvement and recommendations and the methods applied are communicated.

C18 in the matrix 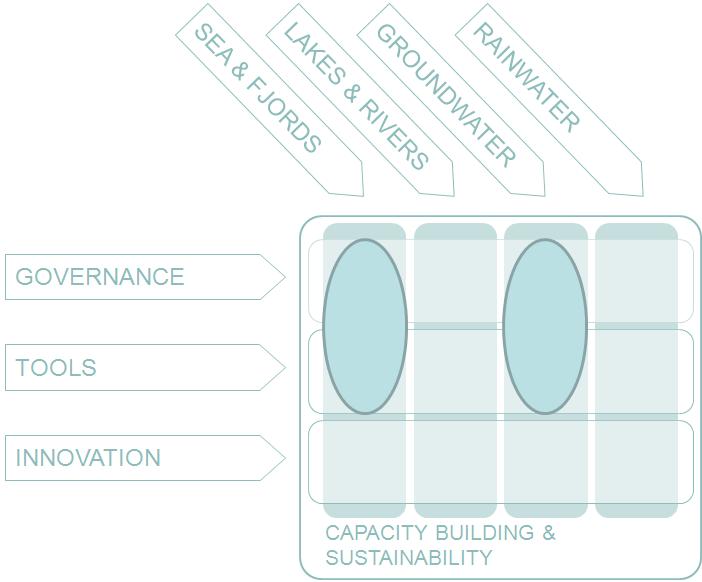